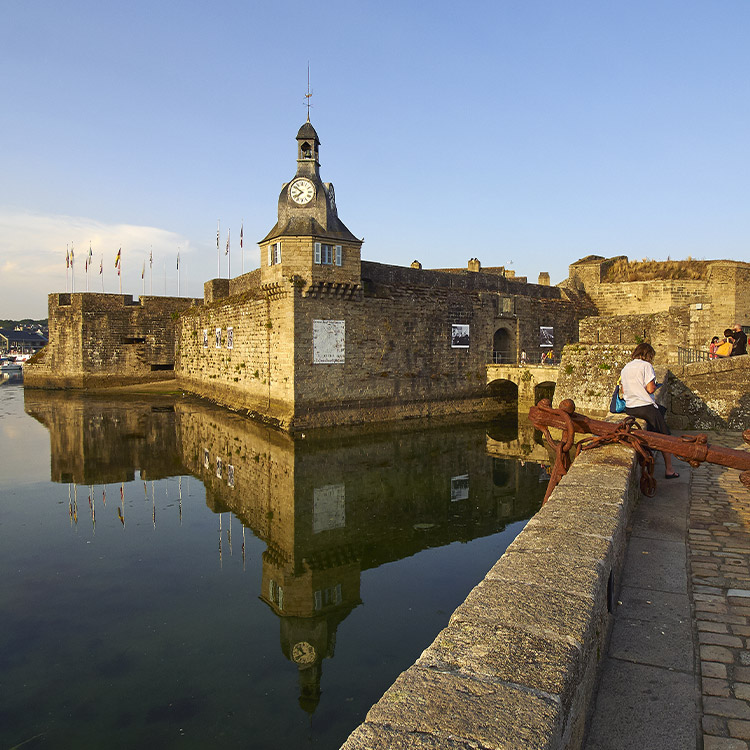 From 1880 to the end of the 20th century, many painters, photographers and filmmakers got inspired by this town dedicated to the ocean, to the sailors, to its fish market…The many art galleries remain as an evidence of the dynamic cultural background of Concarneau.

Concarneau, a town facing the sea

Discover Concarneau and the medieval fortifications of its citadel! The so called “Ville Close”, a former stronghold of Brittany, stands among the calm waters of the harbour.  Island nestled in a cove, the citadel is the cradle of Concarneau and appears for the first time in the local records during the 11th century. Nowadays, the “Petit Bac”, a small ferry, connects the citadel to the Passage, a former fishing district. From 1850, the city developed  outside the fortifications with the installation of canneries in Concarneau. About a hundred sardine and tuna fishing boats and about thirty factories were carrying the local economy.

A little away from the city and the port, a new residential district of villas and hotels appeared along the shore when sea-bathing became fashionable at the end of the 19th century.

The arrival of the train in 1883 largely contributed to the development of tourism. Artists, painters or writers eager to discover Brittany came to live for a while or permanently in Concarneau: Flaubert, Deyrolle, Alfred Guillou…~

Discover a unique museum and dive into the fascinating world of fishery! A pioneer in the collection of maritime heritage, the Fishery Museum presents an important collection of boats, tools and models related to the historical activity of Concarneau. Come aboard the Hemerica, a real trawler docked along the museum’s quay! ~

The fishing port has had a considerable impact on the development of the city: sardine fishing, tuna fishing … Fishery is definetely part of Concarneau’s DNA! In the 19th century, the city spread out of the walls of the citadel with the installation of canneries. Today coastal fishing, shipbuilding and boating industry are the very core of the local economy. ~

To discover the rich past of Concarneau, just follow the blue sardines ! From the Fishery Museum, this enjoyable urban trail will lead you through the history of the « Blue City ».~

PONT-AVEN, THE CITY OF PAINTERS

The Xavier Grall promenade in the city center combines walkways and pedestrian paths dedicated to this famous poet, journalist and writer.  This path goes along the river in the shades of the trees and is one of the most charming spots of Pont-Aven! This small walk is located right in the city centre, however you might feel like you are walking in a place out of the world, an enchanted path under the blooming trees.~

The many granite chaos of the Aven river have encouraged the establishment of dams and the development of mills in the city and in the surrounding area. The famous local saying “Pont-Aven renown city, 14 mills, 15 houses” referred to these 14 water mills that were once in operation. Nowadays,  visitor can discover them by strolling along the water.~

Pont-Aven is also the birthplace of another masterpiece: the little butter cookie, so-called “galette de Pont-Aven”, a local specialty and a gourmet’s delight!  This tasty Breton sweetness, simple and authentic, is nowadays so popular that it became emblematic of Brittany! During your artistic and cultural journey, don’t forget to take a gourmet break…~

PONT-AVEN, THE CITY OF PAINTERS

Pont-Aven is an adorable Breton town nestled on the banks of the river Aven that will for sure delight you with the charm of its colorful streets, the richness of its artistic life and the sweetness of its famous butter cookies! Once a commercial town ensuring the transport of goods between the river and the ocean, Pont-Aven became a meeting point of a colony of painters during the second part of the 19th century. Today, Pont-Aven follows this tradition and still hosts about sixty galleries and artist studios. ~

ONCE UPON A TIME IN NÉVEZ

Welcome to Névez, land of thatched houses! Explore the villages of thatched houses of Kerascoët and Kercanic to discover the picturesque and typical breton cottages made of granite walls and thatch roofs. So authentic!~

THE TIDAL MILL OF LE HÉNAN

Along the river Aven and the GR34, discover a tidal mill from the XVth century. Operating with the ebb and flow of the river fed by the tide, it remains an exquisite historical monument. It is the perfect place for a family stroll in the shade of the trees and a great opportunity to discover many bird species, such as herons or egrets!~

The Standing Stones or “Mein Zao” are another curiosity.  You will only find standing stones constructions in Névez and Trégunc. In the 18th century, there were so many blocks of granite in the fields that it was impossible to make arable lands out of it. First, the farmers asked quarrymen  to chop the stones, and later on fishermen took over. They were paid in granite which they used to build small houses, lean-to and fences. The Standing Stones are tied to Brittany’s history. In 1993 they were certified “Landscape of Reconquest” by the Ministry of Environment for being part of a unique heritage in France.~

In Brittany there will always stand a chapel on your way. These beautiful granite ladies topped with elegant Cornish steeples raise proudly as at the Trinité in Melgven or hide in the shade of trees at Sainte-Marguerite in Névez. A refuge for sailors’ wives at Saint-Nicolas in Port-Manec’h or a stopover on the long “Tro Breizh” pilgrimage route at Locmaria-An-Hent, our Breton chapels often keep their doors closed on their secrets but still welcome young and old visitors and pilgrims during their annual “pardon”, a traditional and religious ceremony often followed by a party. ~

A path dedicated to the writer Pierre Loti recounts his several visits of the city. Renowned french author, he came several times in Rosporden to visit his best friend and got inspired by the Breton lifestyle. Based on his memories, he wrote the novel “My Brother Yves” in 1883. Some pannels in the city centre offer more information about the life of the writer and his beautiful friendship with a breton sailor.~

The chapel of Trémalo in Pont-Aven

The neo-Gothic castle of Keriolet in Concarneau