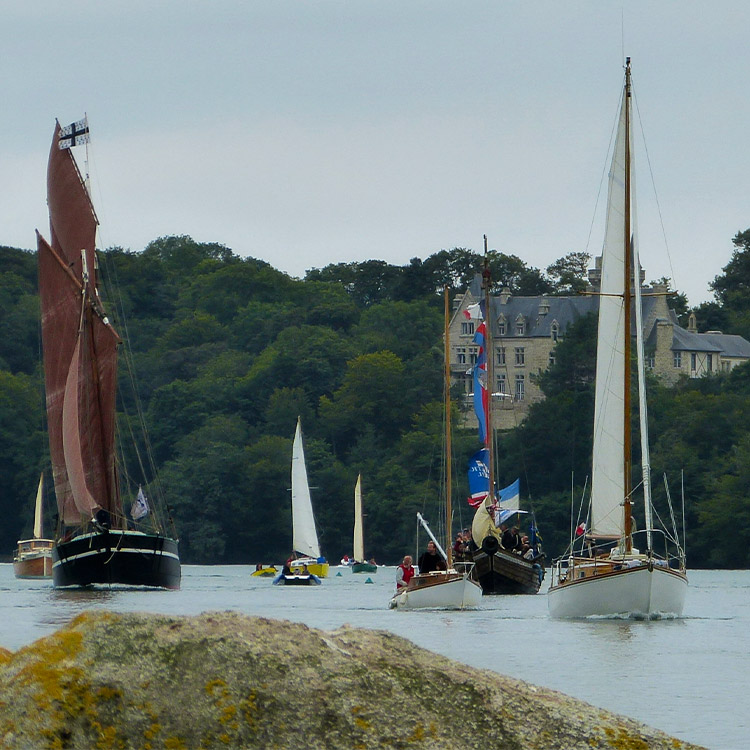 The Belle Angèle is a traditional old sloops gathering. This summer meeting is a must-see for anyone who likes Brittany, old hulls, sea and folklore.

Are you an aficionados of sailing boats, sea shanty and fireworks? You will love the Belle Angèle Festival!

These old sailing boats have been the proud and beauty of Pont-Aven’s harbour during the past centuries.

Where does the name "la Belle Angèle" come from ?

There is a story behind this name…

In the 90’s, the magazine “Chasse-Marée” launched a contest among French ships.

In Pont-Aven, a group of friends decided to create an association named “La Belle Angèle” and started to imagine, dream and create together. They gave the name “Belle Angèle” to their ship, a replica of a chasse-marée from 1877 called “l’Utile”. Her name is reffering to a portrait of Angélique Satre, known as “the beautiful Angèle”: she was the daughter of a well-known family of ship-owners and chasse-marée captains in Pont-Aven.

This association aimed to give a second life to an old sailboat which could be part of the Brest 92 gathering.

– The Yann Youn: dinghy with foremast and seesaw

– The Austerlitz: a 6.80 meters long  mackerel ship, last one of the “ALETH” collection built in 1932 at the Mallard shipyard in Saint-Malo.

– The Armèle Valérie: solid dinghy coming from the Island of Sein. We fell for the lines of this craft built by the shipyard Tanguy.

– The Annexe: recaulked many times, she is quite the forgotten one of the shipbuilding industry.

– The Véga: dinghy with foremast

Unfortunately our Belle Angèle is no longer part of it as she sank in October 2017. But the original group of friends is ready to get back to work. They already have new projects. One thing is for sure, the celebrations will go on in Pont-Aven.

What about the Belle Angèle festival ?

This celebration is unique and magical!

The festival takes place during the last large tide of August (Pont-Aven is a harbour subjected to tides. It is therefore needed to wait for high tidal coefficients to allow the large boats to sail back up the Aven).

About thirty sailing ships from 5 to 30 meters and from 1 to 3 masts sail up the Aven thanks to the tide. They berth at the quays and get ready for the festival. Among them, you will admire the Marche Avec, the Corentin,  the Popoff, the Corbeau des Mers, the Rigolo, the Lola, the André Yvette…

Memories of the Belle Angèle festival

Program of the Belle Angèle festival

You can go aboard several ships, visit and touch ropes and sails.

You can also visit the sea rescue ship (SNSM) and listen to the lifeguards who brave the sea in all weathers to assist  sailors at risk and have so many stories to tell (a visit that the whole family will enjoy).

You will listen to the music and will for sure end up singing and dancing (no worries! There is always someone who can help you learn the dance steps!).

The Queen of the Fleurs d’Ajonc and its maids of honour will be there as well so you can gaze at the most beautiful costume of the Breton country.

It is also possible to buy tombola tickets to support the association and win either an original artwork of a painter of Pont-Aven or a ship in a bottle.

And if you want to build up your strength before the Fest Noz you can buy mussels and chips or grilled food. Do not forget the salted caramel crêpes for dessert!

A great firework is launched at the end of the day: an explosion of colours above the harbour, a splendid Sound and Light show followed by a Fest Noz joyfully animated by the Ruz Réor band.

The compagny “Vedettes Aven Bélon” offers a cruise going down the river while the old sloops are sailing up to Pont-Aven. You can book your tickets at the Tourism Office for an unforgettable show.

If you would rather see the old sailing ships in a more quiet atmosphere, many crews will remain at dockside on Sunday.