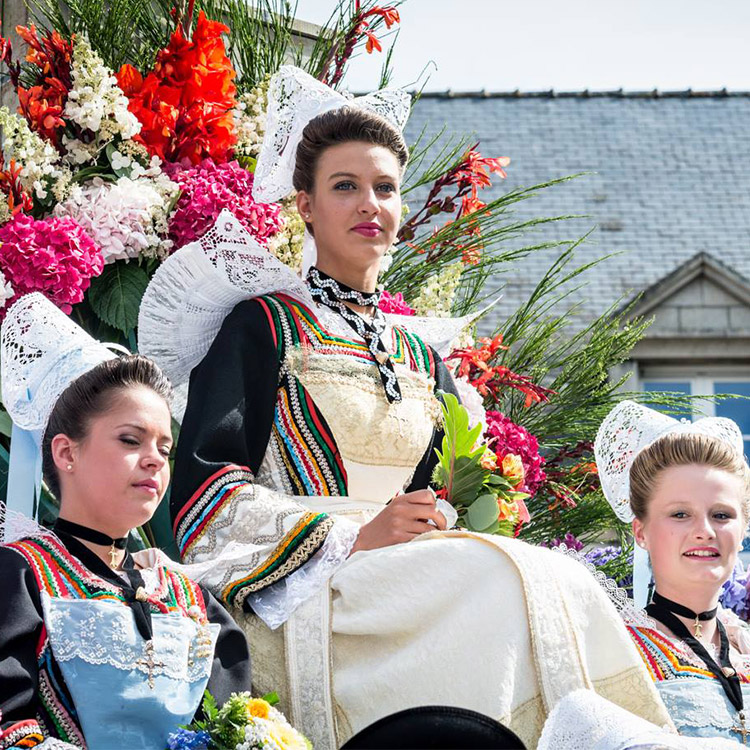 The traditional costume of the Aven

Pont-Aven’s costume is considered as one of the most beautiful of Brittany. Its headdress is known all over the world thanks to Gauguin and his friends. The ceremonial costume is very colourful, has a very large pleated collar and lace handles on its headdress.

Description of the Aven’s costume

Women’s ceremonial costume consists of a long outfit with large sleeves and a cardigan, a bodice, a skirt and a coloured apron.  The velvet fabric can also be brightened up with braids and coloured chenille yarns, embroidered with multicoloured or beaded threads. A wide pleated collar and a lace headdress complete the outfit.

The costume could vary a lot according to age, social conditions, fashion and economical crisis…

The transformations where such that we can wonder how the current headdress of the Queen of the Gorse Flowers can be the descendant of the headdress worn by the local peasants during the XIXth century.

It is composed of two elements:

The small headdress (koef vihan): a cylindrical hat strapped with a ribbon and directly placed on the head. It is worn on its own or covered with the large headdress.

The large headdress (koef vras): a ceremony headdress which fits together with the small headdress. Its two large wings are put up and folded except in case of bereavement.

When comparing the headdresses from different eras we always find these two units.

Before becaming part of the celebration costume, headdresses had a functional role: ensure protection and convenience. Fabrics were very rough and heavy (hemp, linen) and were made locally.

The arrival of delicate lace, tulle and satin refined the headdress. Lifestyle changes, urbanisation and exterior influences have modified some parts of the costume.

The costume bonds the members of a group and insures its prestige! Therefore, competing to be the most elegant amongst all “lands” was necessary. Being less and less sober and rustic, the headdress became more and more precious and delicate. It was kept for special occasions and turned into a festive attire.

Pont-Aven’s headdress not being worn daily, its evolution stopped in the 1950’s.

It used to be the esthetic expression of a group and is now a folkloric component of our heritage.

Its gracious elegance has no need to be praised anymore but beyond the charms of the silk and ribbons, it is moving to see the ingenuity and the skill of anonymous women who, generation after generation, have imagined, created and passed this beautiful heritage down to their descendents.

You can admire these beautiful costumes during one of the numerous folkloric celebrations happening each summer and especially during the Fête des Fleurs d’Ajonc celebration.